Many people enjoy reading as they go to bed at night. I had a friend who said she loves to be reading a book that makes her anxious to go to bed each night.

I’ve also had that experience while commuting to work on a bus. I loved riding the bus because I got to trade reading for driving in heavy traffic--a good swap on any day. However, there were times when I was at a suspenseful point in the book I was reading and I could see that my stop was just a few blocks away.

“Nooooooo! I can’t stop now,” I would think.

That is one of the great joys of reading and it’s one of the premier goals of a writer, especially when your novel is a mystery.

I am now working on a series of mystery novels with recurring characters and generating suspense is one of the greatest challenges. I’ve always thought that the unknown is more threatening that the known. It is true in building suspense in your story as well.

When you are alone in your bed late at night and hear strange noises it immediately builds “suspense” in your life.  Upon investigation you could discover that  something harmless is causing the noise. However, as you lie in bed your imagination runs wild about what it could be. Generally, you imagine the most terrifying of possibilities to be the source of the strange noise.

As you get out of your bed to try to find the noise in the darkness, there is true suspense and terror. We should keep this in mind as we build suspense in our writing.

It’s not necessarily the shark attack but the anxiety that comes when a shark fin suddenly appears in the water and has not yet been sighted by the protagonist.

There are a few things that can be done to amp up the suspense. One is don’t take it too easy on your main characters--put them in peril. The stakes need to be continually raised so that there is some urgency. Nothing builds suspense like a race against the clock. It helps to have an powerful, ruthless villain that you are convinced will stop at nothing. This adds to the sense of foreboding.

As an example, in the upcoming second installment in the mystery series--Deadly Plunge--the two main characters are investigating a creepy old house. The house has signs of a lot of strange activities but at the time it is unoccupied. It is a multi level old house and I established that it has very creaky stairs between the levels. This sets up a chance to build suspense later.

As the characters are quietly searching through the house for clues, they hear creaking sounds on the stairs a couple of levels below. Someone is coming! Who could it be? Are the protagonists in the story in danger? What will happen next?

The main characters were nervous about poking around in the strange house. That last thing they wanted to hear was footsteps on the stairs.  As the footsteps get closer and louder, the protagonists must decide what action to take--and quickly.

The creaky stairs provide what the great Alfred Hitchcock referred to as a “McGuffin.” A “McGuffin” is a plot element that drives the story. Sometimes Hitchcock used “McGuffins” as a diversionary tactic to throw us off of the trail of his mystery.

I rewrote the entire last half of my new book “Deadly Plunge.”  I did so with the intent to generate more suspense. For instance, I put chapter breaks in different places in the story which would leave the reader hanging.

There is a plot in “Deadly Plunge” where the main female character, Amelia Ryan is being stalked by a creepy guy who has become obsessed with her. His intent is to kidnap her.

In this case, the reader knows this stalker is after the female protagonist but the main characters don’t. This adds to the suspense because they are doing things which will--unbeknownst to the main characters--put themselves in danger.

I concluded one chapter with the kidnapper watching Amelia’s bedroom window waiting for the light to go out so he can strike. One another occasion Amelia is taking French lessons and listening to tapes through a set of headphones. This makes her vulnerable to the attacker as he creeps closer to her without detection.

In “The Last of the Seals” the main characters, Sam Slater and Amelia Ryan, are being secretly observed and tracked by some mysterious figures. Sam is still uncertain about why these people are stalking him and his girlfriend.

One night, as Sam is running down a pier in the fog to escape one peril, there is something in the fog that he fails to see. It is two men sitting in a car watching him. They are obscured by the shadows and fog. What do they want and what happens next?

Fog is wonderful. San Francisco fog practically becomes a character in the story. Fog conceals people and events and prevents a clear picture of what’s occurring. It adds to the creepy feeling where at any moment something can suddenly appear out of the fog.

It is exhilarating to read a story like that and it is exciting to write a suspenseful story, especially when it works.

One of the tag lines I’m using to promote my book sums up the feeling I’m going for in my mystery novel.

“Danger lurks just around the corner in foggy San Francisco.” 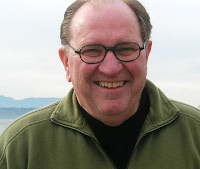 Greg Messel has written four novels and three unpublished memoirs. He published his premiere novel “Sunbreaks” in 2009, followed by Expiation in 2010 and The Illusion of Certainty in 2011. Last of the Seals is the first in a series of mysteries which are set in 1957 San Francisco. The second book in the series Deadly Plunge will be published around Christmas of 2012. Greg grew up in the San Francisco Bay Area and has had a newspaper career as a columnist, sportswriter and news editor. He won a Wyoming Press Association Award as a columnist while working for a daily newspaper in Wyoming. Greg also spent many years in the corporate world as a Financial Manager. He now devotes his energies to writing at his home in Edmonds, Washington on the Puget Sound just north of Seattle, where he lives with his wife, Carol.

The year is 1957 in San Francisco. Sam Slater is a lifetime minor league baseball player for the San Francisco Seals. The Seals have just one more season left as San Francisco is about to become a major league city. The Giants are coming to town in 1958 and the Seals will be displaced. Sam has come to the end of his baseball career and is going to join the private detective agency of his best friend. When his friend is brutally murdered, Sam must go it alone and try to find out why. Along the way he is swept off of his feet by a beautiful Elvis-obsessed TWA stewardess named Amelia Ryan. Sam and Amelia try to unravel the mystery together. Sam’s best friend, Jimmy inadvertently saw something he shouldn’t have. Sam and Amelia have pictures in their possession that have crime families in San Francisco and Chicago very worried. Then a young woman Sam has been searching for is found dead on the beach. Suddenly, Sam and Amelia find themselves in danger. On dark and foggy San Francisco nights, trouble is lurking just around the next corner.

Former baseball player and newly-minted private investigator, Sam Slater is hired to find out why a rich, politically-well connected San Francisco man, Arthur Bolender,  suddenly ended his life by plunging off of the Golden Gate Bridge. All those who know Arthur say unequivocally that he did not commit suicide.  However, Bolender’s body was found floating in San Francisco Bay and his car was abandoned in the traffic lane of the bridge.  Meanwhile, Sam’s romance with glamorous TWA stewardess Amelia Ryan continues to blossom and deepen. She is now his secret fiancee. Amelia also eagerly helps Sam solve his cases when she’s in town. The key to unraveling the mystery seems to be a strange old Victorian-style house. Bolender’s widow, a rich, seductive socialite named Maggie Bolender, was not even aware that her husband owned the house. What is really going on behind the doors of the mysterious house?  Finding the answers will plunge Sam and Amelia into a dangerous world of political intrigue in the exciting sequel to “Last of the Seals.”