Ahh, spring. Not quite as exciting in South Florida as it was when I was back home in Wisconsin. I do miss the Midwest's spring weather -- not so much the winters!!

But along with the promise of summer heat and humidity, come thoughts of the High Country of North Carolina, where my fiancé, fellow crime-writer Jeremiah Healy, and I will spend a good deal of the season.

It was our first visit to the Banner Elk area, in the Blue Ridge Mountains northeast of Asheville, NC, that inspired RUNNING ON EMPTY, the first book in my new Main Street Mysteries series. The fictional Sutherton, set on the equally fictional Lake Sutherton, is a cut-and-paste job. I sort of took Grandfather Lake and shoved it up against Sugar Mountain, which is where we stay while in High Country.

Then, I added Main Street on the south side of the lake and, on it, built Mama Philomena's, the restaurant around which everything in Sutherton revolves. Mama's is across from the beach and Sal's Tap, where Sal entertains with Sinatra ballads sung to background music from his I-pod, and locals wager on tourists, whose numbers swell Sutherton's population from a little less than a thousand to "a little more than bearable," getting nailed while backing their big cars out of the angle-parking spots.

Griggs Market, on the corner, has been replaced by a coffeehouse/nightclub, but that's where AnnaLise Griggs, my reporter protagonist grew up. Her mother Daisy still lives in the apartment attached to the former market.

At the opening of RUNNING ON EMPTY, AnnaLise is called home by Mama -- the owner of Philomena's and her mother's best friend -- because Daisy, in Mama's words, "went and drained all the blood out of Mrs. Bradenham."

In this first book, just released, AnnaLise needs to figure out not only what's going on with Daisy, but also with Sutherton in general.

People are dying in greater numbers than usual, even for this quirky town where life has always been inexplicably hazardous, no matter the season. The skier who choked on her gum halfway down Deer Slope, arriving at the bottom still standing, if not breathing. The fishermen squashed like road-killed possums by a Toyota Land Cruiser against the front of Lucky’s Bait Shop. The skinny-dipping White Tail Lodge hostess, dead from hypothermia. And that doesn't count the odd tourist or two each year wandering into the mountains, never to wander back out.

But even after our intrepid reporter solves that mystery, she has another question to answer. Should AnnaLise remain in the High Country?

Since I'm going back and will be writing book number two there, I think you know what AnnaLise decides.

As for me, I'm very happy about that. Cool mountains, clear skies, fresh air and new fictional people to kill--what could be better!

With wishes for a good spring and summer to y'all,

PS: The first three books in my Maggy Thorsen coffeehouse series have just been released on Kindle (I know, Melissa—Nook is coming next!! ;-), as well as a new original novel about a fireworks family and the explosion that nearly destroys it, called HEAVEN’S FIRE. Hope you e-bookers will try them out! 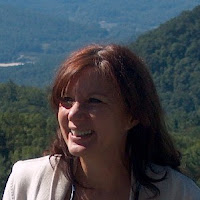 Sandra Balzo turned to mystery writing after twenty years in corporate public relations, event management and publicity. A CUP of JO, her sixth Maggy Thorsen coffeehouse mystery came out this past fall, and Sandy's second series, Main Street Mysteries, debuted in April with RUNNING ON EMPTY. The books, set in the popular vacation destination of North Carolina's High Country, will alternate with the Maggy Thorsen mysteries. HEAVEN'S FIRE, about a fireworks show gone badly wrong, was just released directly to Kindle.

Balzo's novels have been nominated for both the Anthony and Macavity awards and received starred reviews from Kirkus and Booklist. In addition to her books about coffee-maven Maggy Thorsen, Balzo writes short stories, two of which have been published in Ellery Queen Mystery Magazine, winning the Macavity, Derringer and Robert L. Fish awards.

Balzo has handled publicity for three Bouchercons (World Mystery Conventions), as well as the International Association of Crime Writers, and has served as a national board member of Mystery Writers of America.


The Maggy Thorsen Mysteries
UNCOMMON GROUNDS**
GROUNDS FOR MURDER**
BEAN THERE, DONE THAT**
BREWED, CRUDE and TATTOOED
FROM THE GROUNDS UP
A CUP of JO
TRIPLE SHOT (coming late 2011)
The Main Street Mysteries
RUNNING On EMPTY
Kindle Originals
HEAVEN'S FIRE**
THE GRASS IS ALWAYS GREENER AND OTHER STORIES**

A Crafty Killing by Lorraine Bartlett


I was walking through Barnes & Noble and the title caught my eye and I decided to give the series a try. I really enjoyed this book and thought that it was well developed.

Katie Bonner has had a difficult year when she becomes the owner/manager of Artisans Alley. This was not a job that she wanted, in fact, Artisans Alley contributed to the end of her marriage. Katie has dreamed of opening her own bed and breakfast in Victoria Square. As she gets to know the artisans who rent space in Artisan Alley and becomes involved with the other business owners in Victoria Square, she ends up finding that where she is now, managing Artisans Alley, is a good place for her. She still has the dream of owning her own bed and breakfast, but she is also starting to see the possibilities of Artisan Alley under the proper management.

As I read this book, I kept trying to figure out who the killer was, but I certain didn't expect who it turned out to be. I look forward to reading more of this series.


I put this series down a while back because I was having a hard time reading it. I recently saw this title as I was looking for something to borrow for my Nook and thought that I would give the series another try. I have to say that I liked this book. I had a good time reading it and was done with it rather quickly.

I am definitely missing some background information in this series and will need to go back and reread to find where I left off and to get caught up in the lives of Anita, Jean Claude and the rest of their group.


This was a quick read for me. I am a little out of the loop in this series and will have to go back and see what I am missing.

I hadn't realized that Anita had picked up a new power that let her draw strength/energy from a were. I also thought that it was interesting that she was able to "make" the were lion her "Bride" even though she isn't a vampire. Again, this must be something that I am missing from not having read all of the books in the series up to this point.

Treachery in Death by J.D. Robb


This volume of the In Death series was pretty good. I enjoyed reading it. While the plot wasn't very complicated, this book had a good pace and showed some interesting interaction between the characters.

I thought that Ms. Robb did a good job of building the characters. Peabody is definitely coming into her own as a detective and becoming more confident in her skills. Mira is shown to be capable of making mistakes in judgment, although in this book, several individuals in authority made the same mistake.

She also has me wondering if she has an end in mind for this series, though not any time soon I hope! It seemed to me that Dallas was showing more skill at handling the politics of command in this book. She knew when politics was needed and seemed to be playing the game better than she has in the past. I also noticed that Whitney seems to be asking her more frequently if she has ever though about sitting in his chair in the future.

I had a good time reading this book and can't wait for New York to Dallas to come out later this year.